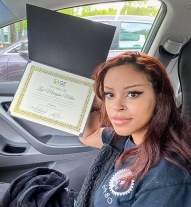 To prove that the Harris County Department of Education Head Start program helps prepare students for their future academic studies, just ask former HCDE Coolwood Center student Zoe Miles. She is the 2020 valedictorian of her class at Sage Academy in Brooklyn Park, MN.

Her mother, Joanna Beale, served as an HCDE Head Start teacher at the Coolwood Center in northeast Houston from 2006 to 2008. Miles attended the same center from January to May 2008.

As a former Head Start student in the 1960s, Beale is an advocate for Head Start because of how it can help kids succeed, especially those from low-income families.

“This was a blessing to Zoe as we qualified for her to go to help with her academic and social skills,” said Beale. “I noticed she began talking better and more (frequently), along with learning how to write her name.

“Center personnel also discovered she had a hearing problem thanks to the testing they did, so she was able to have surgery to fix the problem.”

Her mother appreciates how Head Start also deals with the medical aspects. Many families are unable to pay for or find the health services their children need. Head Start staff helped identify medical issues early on.

Zoe remembers times with her best friend she made in pre-k and was close with through elementary school. They enjoyed holiday celebrations and events like hat day.

Beale and her family moved to Minnesota in 2009.

“We value her time with Head Start because it gave Zoe her foundation to live by during her school career and helped her step out of her comfort zone,” Beale said. “She took advanced courses while in junior high and high school.”

During her last semester, Zoe was a dual-credit student and took classes at North Hennepin Community College along with her classes at Sage Academy.

Due to COVID-19, her graduation date was rescheduled to Aug. 27. She finished her high school coursework with a 3.81 GPA.

She intends to major in human services with plans for a career in social work after graduating from college.