Good Teaching: It means really knowing the wrong answers too

According to the American Association for the Advancement of Science Project 2061, 37 percent of high school students believe that the number of hours of daylight received on Earth changes because of the varying distance between the Earth and the Sun.  A wonderful video series entitled “A Private Universe” produced by the Harvard-Smithsonian Center for Astrophysics shows that Harvard graduates have similar misconceptions. Even more misconceptions from the general public can be seen at https://www.youtube.com/watch?v=b3TRUDKpoAs.

What is pervasive in both videos are two very common misconceptions:

1) The shape of the orbit of the Earth around the Sun is an exaggerated ellipse (oval), and

2) The Earth is closer to the Sun in the summer.

It is not naïve or unreasonable to assume that the closer you are to something really hot, the hotter you will feel.  This is why teachers have to address big ideas by starting with the misconceptions. If we don’t understand flaws in student reasoning, it’s impossible to undo a misconception and replace the idea with scientifically sound concepts. 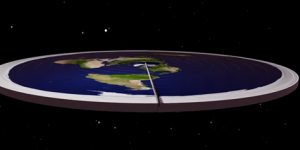 In the mind of a typical elementary student, this mental model makes perfect sense.  Of course, it has no connection to what the teacher tries to convey.  Even when presented with a three-dimensional model of the Earth, some students assume that even though the Earth may be spherical, they are standing on the flat part at the top.

Luckily, even without a good grasp of gravity, as students get older, they are better able to accept the idea of a spherical Earth and that gravity keeps us at its surface. The same cannot be said for misconceptions about what causes seasons.

By far, the main reason students (and many adults) have a poor grasp of a working model of the seasons is because they have been exposed to images of the Earth’s revolution around the Sun that can be misconstrued.

The shape of Earth’s orbit:

There is nothing wrong with this image, but students need to have a deeper understanding to get the true nature of the shape of Earth’s orbit. Many teachers identify the shape as an ellipse. It is, however teachers should know what an ellipse actually is.  The shape above is an ellipse, but so is a perfect circle.  If the only image a student sees is similar to the one above, the student may think that an ellipse must be an exaggerated oval and that the Sun is much closer to that ellipse part of the time.

Students need to understand the perspective of the images shown.  I like to use a hula hoop as an example.  If you look at it from above, it looks like a circle, but if you view it from the side, it will have an oval shape.

Students need to be shown views from above (North Pole views) as well as from the side (equator views) and understand that they are illustrating the same path.

The image above better illustrates the actual shape of Earth’s orbit around the Sun.  The actual elliptical path is closer to a circle in shape that it is to an oval.

The misconception that the Earth is closer to the Sun in the summer can be addressed in additional ways. Allowing students to directly confront misconceptions is ideal.  The image below is a good example.

Even with an equatorial view of the Earth’s orbit around the Sun, it is quite apparent that the Sun is closer to Earth on Jan 2 than it is on July 2. A teacher can print out the picture and let students make measurements with a ruler.  Ask them why it is hotter in July than it is in January. Let them put their explanations in writing.  Only now can a teacher really address the tilt of the Earth and the effect of the amount of direct sunlight on temperature. Without a good mental model and a chance to directly confront misconceptions, it is unlikely for students to change their understanding from a misconception to a scientifically correct understanding.

It is not always that the closer you are to something really hot, the hotter you will feel.  The correct understanding with regard to seasons is that the more direct sunlight you have, the hotter you will feel. If teachers have this in mind when introducing and covering topics like seasons and the Earth’s rotation and revolution, students will be much more likely to actually understand how daily temperature fluctuations and seasons work.

A study by Philip M. Sadler and Gerhard Sonnert shows that when teachers included common misconceptions as incorrect answer choices on assessments, the misconception was actually more likely to be chosen by students.  In the same study, when teachers were asked to predict incorrect answer choices of their students, only 41 percent could correctly identify likely wrong answers that students would choose.  Professional development on student misconceptions is critical.

HCDE is offering a series of workshops addressing student misconceptions in all areas of science relating to the science TEKS and STAAR released science questions for grade 5 and 8 and high school biology.  Find out more at http://wms.hcde-texas.org.

About the Blogger:
Lisa Felske is curriculum director for science at Harris County Department of Education. Her areas of expertise include integrating science with other disciplines and student misconceptions in science. She enjoys being a Girl Scout leader, reading way past her bedtime, and using the Oxford comma.