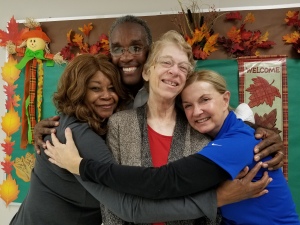 [Note: November is CPR Awareness Month. This article relates a true story about how knowing CPR saved a life.]

Many people don’t think they will ever have to use cardiopulmonary resuscitation (CPR), but having the training will help save someone’s life.

Just ask the staff at Academic and Behavior Schools West when they had to put their skills to use after a fellow teacher collapsed from a heart attack.

June 7 started out as any other day for life skills teacher Karen Weiskopf by going to work for a teacher workday before summer break.

“I felt fine just like any other day and had just signed in at the front office around 8 a.m.,” Weiskopf said.

“As I was going to the counselor’s office, I saw Mrs. Weiskopf beneath the desk in the front,” Keys said. “I called for the nurse to get help.”

AB West nurse Barbara Hurd was just down the hall and heard Keys yelling nurse when he usually calls her Mrs. Hurd.

“I ran over and that’s when I saw Mrs. Weiskopf on the floor,” Hurd said. “She started experiencing strained breathing then stopped breathing and told Dr. Keys that we needed to start CPR.”

Keith Oliphant, who is currently the principal at AB East but was the assistant principal at the time, was in his office when he heard the commotion.

“Mr. Oliphant is the type of person that will finish what he is doing before getting up,” Weiskopf said. “That day, he heard his mother say ‘move,’ so he did.”

Keys gave her rescue breathing while Hurd and Oliphant performed chest compressions with help from the Automated External Defibrillator (AED).

Weiskopf had stopped breathing for about 10 minutes then a pulse was found.

“We just knew that we wanted her to stay with us and did everything we could to help her,” Hurd said.

EMS was called and transported Weiskopf, along with assistant principal Gaylynn Sanders, to the hospital for treatment.

“The EMS and doctors told me that they were very impressed with what they did and how fast acted because they did everything right,” Sanders said. “I couldn’t wait to come back to tell everyone because we do participate in CPR trainings.”

The staff at AB West trains every year on CPR and believes it is an important skill to have because you never know who will be in need.

It saves lives, they all said.

“Take a class anywhere because nine times out of 10 it could be a loved one and you will need to respond,” Keys said.

Weiskopf is now retired and doing well after having a triple bypass five days after the heart attack.